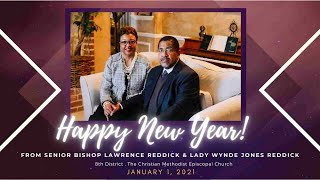 CME150 Facebook Live Conversation with the Youth of Our Church

The Sesquicentennial Celebration of the Christian Methodist Episcopal Church

The Communication and Information Technology (CIT) Connectional Department is sharing virtual ministry resources for connectional members, local churches, Districts and Episcopal Districts to use through this season of social distancing due to the COVID-19 virus.

A SEASON TO REMEMBER AND ACT   “To everything there is a...

Announcement Regarding the Balm in Gilead Healthy Churches 2030 Conference, November 16-19,...

Note: Presiding Bishop Thomas L. Brown, Sr. of the Sixth Episcopal District is sharing this outstanding news and press release regarding the TRACS accreditation of Paine College. Bishop Brown expresses his sincere thanks to everyone for their prayers! October 27, 2020 For Immediate Release: October 27,...

Dear CME Family, Join the College of Bishops in their Call to Action to lift up the importance to register, vote and get to the polls. Thanks to Bishop Marvin Thomas for leading this initiative. Each week, a Bishop will present a Call to Action video....

Growing The Church During A Pandemic Using a Technology Team  Rev. Leon C. Moore, Jr., General Secretary of Evangelism and Missions   In my last article, we looked at prayer to lay the foundation for growing the church during...

View online ﻿ Growing The Church ﻿During A Pandemic Through Prayer  Rev. Leon C. Moore, Jr., General Secretary of Evangelism and Missions﻿   In my last article, we looked at four teams that would be necessary to grow the church during a pandemic. I suggested “We...

Dear CME Family, The College of Bishops of the Christian Methodist Episcopal Church is expressing our support, solidarity and admiration for the Milwaukee Bucks, the NBA, WNBA and MLB players for their courageous actions, leadership and rise to the, “Call of the Moment”, by their refusal...

Sign Up Here For Email Messages from CME Church Communications.

The CME Church has more than 1.2 million members across the United States, and has missions and sister churches in Haiti, Jamaica and fourteen African nations.

The mission of the Christian Methodist Episcopal Church is to be disciples of Jesus the Christ by serving individuals, communities and the world as the representative, loving presence of God and as witnesses to God’s salvation and grace.

The vision of the Christian Methodist Episcopal Church is to be a transforming church for Jesus the Christ within a changing world.